Let me be frank, I am not an expert in medicine but I am good with dissecting the information and finding the core of the issue.

Since my readers come from several continents, this information will be valuable to everyone.

There was a lot of changes since doctors in Wuhan, China, noticed a cluster of cases involving a mysterious pneumonia – like illness. There are several theories about the virus source (including the conspiracy theories among others):

I intend to believe that the bats were the carriers of the virus.

Entire planet is in the condition of fear due to Covid-19 – a new variation of coronavirus. Yes, it is not the only one known to the scientists. In fact, there are seven variations of a coronavirus to infect human (including four seasonal types that cause a lot of human suffering), and that one is seventh.

In addition to those four, infections known as SARS and MERS, are also known as a form of coronavirus infections. Here are some short facts:

The symptoms of disease: 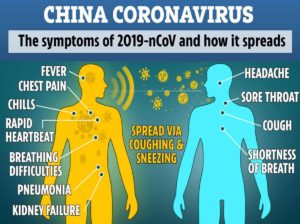 The number of biotech companies have announced the plans to develop a coronavirus vaccine. Here are some short facts:

The bottom line is the fact that the fear of pandemic damages the economies around the world more than the virus itself considering quite a low death rate (see above). Whether or not global lock-down can stop the virus, the economic impact will be staggering.

All of it, has created the stock market panic not seeing for a long time, with the Dow Johns Industrial average dropped 1,200 within a day. We have been witnessed a massive sale of stocks due to a simple fact: there were almost no buyers!

The disruptions of services, distribution of intermediate parts (supply chains) for many machinery, electronics, pharmaceutical, food, etc. – all of it was affected by the countries’ measures to prevent spreading of a virus, previously unimaginable:

Unconfirmed data from Russians about China’s troubles is quite disturbing. They report the disruption of the services in several of the major ports in China due to the shortage of workers. Tons of products including meat, grain, etc. are not being moved (including those from the USA). Just imaging the consequences… Still, I would not rely on their information as it can be fake news.

Anyways, the question is how to avoid being sick?

Here is a short list of what to do in order to protect you from getting infected.

Be careful out there. I hope this information was useful. Your comments as always welcome.

If you are not the club member, simply fill out a short form below for free membership. You will get notifications about a new article.

DISCLAIMER: This article is intended to provide information to interested parties.Please excuse any typos.  I assure you that I will do my best to correct any errors if they were overlooked.