Manhood is under attack 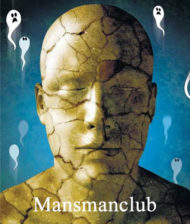 Manhood is under attack.

Do you realize that we happened to live in a thin-skinned society where everyone is being offended easily? Day-after-day, there are more and more ridiculous cases of "sensitivity" to something that years ago no one would be even paying attention to.

We have started with dismantling the statues and continued with denying to play a certain Christmas song that may offend the #metoo followers.

Where is an end to it?

Where are our strong spirit and manliness? Where is our respect as a nation to our past (even if not everything was so great)? Is it being replaced by new " manliness" that has nothing to do with man's man qualities but rather womanliness?

There is a funny poster of a man who woke up in the morning and asked: "What are we offended by today"? 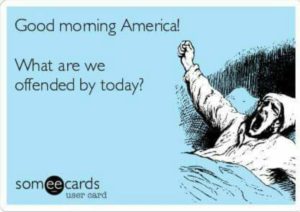 That continued attitude to search for more cases of offense is diminishing our strength as a nation, is creating multi-cultural tensions, and making us not stronger but weaker to the degree that our enemies can easily exploit our new weakness.

Russian propaganda is working toward diminishing the Western way of life. It is already a known fact that 30% of millennials prefer socialism. Brainwashing in liberal colleges along with the media's targeted propaganda do damage to our society and capitalism - the only system that has proven to deliver freedom and prosperity to its citizens.

What do they know about socialism? Close to nothing beyond the college books.

Let's take Russia, for instance. 100 years since the October revolution when the first idea of equality was implemented. Guess what? Total disaster! The small gangs of former thieves, bandits, and those who were close to the communist party and KGB rule the country and are getting fatter every day while ordinary citizens (those who should have that infamous "equality") struggle to feed the family.

Read the story of ordinary Russian.

“I feel sorry for retired people. But I am even more sorry when a man who works his entire life in a factory or government organization is getting a beggar’s salary.

I was born in the city of Vologda in Russia. I have a Bachelor's Degree (my emphasis). I have been working in the railroad organization for more than 25 years. My compensation is about 25,000 rubles (this is with the additional night shifts – I am considering myself lucky). My wife makes 12,00 rubles. Total: 37,000 (or $547.00 U.S. dollars).

We have two kids. Our son who is in college in Saint Petersburg is getting a scholarship of 3,000 rubles. Another son is in a technical school. Now, calculate our expenses. Community fees: 7,000 rubles; college cost: 5,000 rubles; transportation cost: 1,000 rubles per person, plus sometimes you have to buy some clothing.

What is left for food? In the best-case scenario, 4,000 rubles. This is a source of a health problem: no healthy teethes are left, and why do we need them after all when there is almost nothing to eat?

I am trying to catch ANY part-time job just to survive from month to month.

Lunch:  soup, mostly with veggies but sometimes with chicken bones (the soup pack with bones for 60 rubles per kilogram) plus a piece of black bread.

Dinner: fried potatoes or pure with a pickle and veggie salad. Sometimes, macaroni, rice, or buckwheat with a sausage of doubtful quality (90 rubles for pound). Much more seldom, chicken (200 rubles per one if on sale), pork (you have to find one on sale!) for 200 rubles per kilogram. I did not eat beef for at least 5 years.

I am not complaining – many people live much worse. We are trying to help each other if we can.

It is pity that in so rich a country, there are so many beggars and so many billionaires.”

Here is what I have heard from the guy (I met him in the cigar club) who was in Kyiv (the capital of Ukraine - a part of the former USSR) just a month ago. I am sorry for such the details but the reality of it is mind-blowing. When people use the bathroom, they flush the toilet just once a day because the cost of water service is enormous. They save money for food.

Guys, I did not even mention some bloodiest facts in the history of the USSR (or Russia today) like the biggest, artificially created hunger designed by the “the most progressive regime in the world” on the territory of Ukraine; the “3 spicas of grain” law when people were arrested and executed if the authorities found at least 3 spicas of grain in your hands; about the NKVD barricades that have blocked people from moving out of dying villages; and at the same time, the trains and trains of Ukrainian grain for export!

I am not even talking about red terror, the labor camps for kids, and the repressions of 1937th. Read more in my next post about the Soviet version of Auschwitz.

Truly, I would give every youngster to read the “The GULAG Archipelago” written by Solzhenitsyn, so they may reconsider their love for socialism as a system.

I could continue with Cambodia, Cuba, and today’s Venezuela.

Do we need the men who dream about socialism?

I worry in which society our grandchildren will live. In the one where everything (all aspects of life) is under government control enforced by political correctness with the redistribution of wealth or in the free society that is still based on the Constitution created by our Founding Fathers?

What do you think about it?

Many men across the country check their behavior at work to protect themselves in the face of what they consider unreasonable political correctness -- or to simply do the right thing.

Men are adopting controversial strategies for the #MeToo era and, in the process, making life even harder for women.

“Women are grasping for ideas on how to deal with it, too, because it is affecting our careers,” said Karen Elinski, president of the Financial Women’s Association and a senior vice president at Wells Fargo & Co. “It’s a real loss.”

But there is another danger of political correctness. “If men avoid working or traveling with women alone, or stop mentoring women for fear of being accused of sexual harassment, those men are going to back out of a sexual harassment complaint and right into a sex discrimination complaint.”

There is a so-called "the Pence Effect", after U.S. Vice President Mike Pence, who has said he avoids dining alone with any woman other than his wife. In the future, the overarching impact can be, in essence, gender segregation.

Interviews with more than 30 senior executives suggest many are spooked by #MeToo and struggling to cope. “It’s creating a sense of walking on eggshells...”

For obvious reasons, few men will talk openly about the issue. Privately, like at this blog, many of the men acknowledged that how uneasy they are about being alone with female colleagues, particularly youthful or attractive ones, fearful of the potential liability.

In this charged environment, the question is how the response to #MeToo might actually end up hurting women’s progress. It may simply backfire.

One man offered a solution: “Just try not to be an asshole.”

Maybe he is right. Better be a man's man.