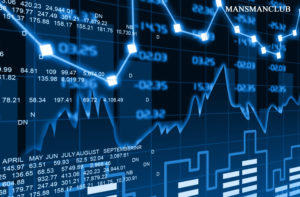 More discoveries.
(This is part II of my article "MY CASE AGAINST STOCKS RATINGS".)

I was trying to find the rationale behind the stock’s movements for a long time.
After all, there should be some events that force the stock price to change the direction or move sharply in the same direction.

What causes the stock to grow or to slide down? What causes do they stock to hibernate in the same range?

1. EARNING.
OK, no doubt, the earning release is one of such events. Most of the stocks report the earnings release once a quarter. And any surprise (positive or negative) would heavily affect the stock price and, correspondingly, the reaction of the investors not to mention the algorithm trading computers that are designed to react to the news release. They all force the stock price to move in the same direction (up or down).

2. EVENTS
Beyond earning release, there could be important events that may affect the future stock movement.

It could be some political or industry news that changes the mind of investors.
If they feared anything that could potentially decrease the stock earning or dividends, they would be on the sellers' side.

Some of the events include:
* company's management decision or announcement (like the new plans, purchasing the shares of that company, changing the management, buying new business/selling the part of own business);
* competing companies of the same industry have lost the revenue for any reason or captured more market shares. It affects the mood of investors, and they may review their standing regarding stock holding toward selling;
* unfavorable environment for stock growth (i.e. high cost of gas for airlines or bear market – the price is being driven down by short-sellers);
* natural disasters (for example, the insurance companies that will be affected);
* political events (strikes, the government shutdown, a war, government subsidies, or decision to support or deny the support - like alternative energy, for instance); political party preferences toward certain industries, etc.;
* some comments from the industry or stock observers.

4. STOCK RATINGS
This cause is the most controversial.
In my post about the stock rating problem, I have shown that the stock analysts are wrong in most of the cases for one simple reason (not counting their poor prediction skills or the lack of information): all of them are talking about EXPECTED EARNING in the FUTURE. As you know, prediction is a silly job. How do they know what will happen in the future?

They guess based on what the company's management that they evaluate had decided to say during a conference call. They guess based on a bunch of crunched numbers, graphs, charts, past data, etc. taken from the SEC forms and other publications. No matter what they have collected in their computers, after all, their stock rating is a pure guess.

Recently, a friend of mine has been talking to the CEO of one of the companies that are listed on the stock market (I have promised not to disclose the name of the stock). What the CEO has revealed after a few beers just have proved my suspicion.

Imagine that you are that CEO, and your company has some internal problems that should be solved or it will affect the bottom line.
It is up to you to reveal it or not. Knowing that the negative news may affect the stock price and your compensation or bonus, the news could be suppressed in a hope that the problem will be solved within the next quarter.

Yes, as CEO of a public company, you should be transparent, yet, this "transparency" is a vague word. When the stock analysts ask the questions, the CEO is smart enough to answer the way he chooses.

My point is that even when the analysts have been reading all official statements from a company, extracting the numbers, and talking to the company's management, there is no way they know exactly what is going on in the company now and what will happen with the company in the future.

This is a reason why the stock analysts are mostly wrong in their estimates.

5. THE MOST IMPORTANT ONE.
Now, let me reveal the most important factor #5.

A few days ago, I have been watching the web presentation from Roger (one fellow who also tries selling his stock advisory for $1,500/year).
He has studied various charting techniques and trading strategies for the last 20 years using reliable data.

I found his discoveries very valuable, and I will talk about them in another post soon. However, the most shocking discovery was about how the stock analysis affects future stock movements.

No matter(!), the analyst is right or wrong, if he is known as knowledgeable in a particular industry analyst among institutions or hedge funds, his conclusion about a particular stock will greatly affect the stock price movement within the next several days after his opinion about the company has been published.

Sometimes, the stock rating company that has a solid reputation (not a particular analyst) releases its stock rating, and it produces the same effect on the future stock price.

What is interesting is that the stock rating from those analysts affects the stock price in the short term, however, it may be wrong in the long-term that is usually the case. It means, you may use the stock rating as one of the “parameters” to consider for a momentum or “swing” trading – the trading based on several indicators for a short time trading (usually from a few days to 2-3 weeks, or until the hedge funds and institutions are loading the shares).

So, how does it work in reality? Let's use a chart of PEGI (Pattern Energy Group Inc.). 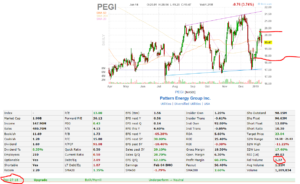 As you may find at the bottom of the chart, the stock has received an upgrade on December 27th from BofA/Merrill rating agency that has expertise in the Telecomm industry, so, the institutional investors and hedge funds accept the rating seriously.

Looking at the chart for a few previous days doesn't encourage buying the stock. The positive momentum is not there, the volume is higher due to selling, and the stock chart points to further decline.

Suddenly, in the next few days, the volume spikes and the price goes up sharply (from $18.50 to $20.3).
You are still not ready to buy since the stock did not reach the buy point (for instance, in the cup and handle formation, or, in our case, perhaps, slightly above crossing the 50 MA line at $19.55).

You like the volume and the fact the price is up but, since you are a disciplined trader, you are waiting for the right moment.

Finally, the stock has reached the buy point, and you snap some numbers of shares in a hope that now the stock will go up even faster, yet in a few short days the stock is losing steam and the price drops down sharply in January 14th.

In the best-case scenario, you sell the stock on the downtrend with a small profit ($20.3 -$19.55 or 3.7%). If the scenario is not favorable to you, you would cut your losses. At the same time, the institutions will snap close to 9% profit within 2 weeks.

I have been in the same situation multiple times. I could not understand where I was wrong! I have followed a classic set of rules for buying a stock but I have failed, anyway.

The answer is simple but surprising.

If the analyst or his stock rating company has released any positive rating AND that analyst or company are considered to be knowledgeable about the stock's industry, AND there is no negative ratings from other analysts or negative news, the hedge funds and other big institutions load the shares right away. They DO NOT WAIT for the right buy point.

They drive the stock price up to the point when they have loaded enough shares. With abrupt lower demand and lower volume from buyers, the sellers step up, and the price begins sliding down.

You are lucky if you have finished some gains. Most of the gains are in the hands of the institutions!

Considering that you know about factor #5, is it enough to capture more gains in the future? Hmm… I wish it was so easy.

How do you know if any particular analyst is an authority in his field of knowledge? There are more than 4,000 of them. What is a guarantee that after a positive rating from some rating agency the stock will advance?

Good questions.
There are many variables including the market direction at the moment of the stock rating release.

So, now, what is your reaction? What would you do differently?

Guess what I have begun doing after gaining that knowledge? I have no analysts working for me like in the large rating agencies but I began collecting data about those agencies and their specialization and who is right or wrong in their estimates.

It might take me months until I will consider it as one of the factors based on my collection but it makes perfect sense to do so. If you will subscribe to the club membership, you have the chance to get my discoveries in another post.

Don’t get me wrong – factor #5 along is not enough to throw your money on any particular stock even with the issued upgrade. Look at other indicators and market direction. I have recently begun using the parabolic SAR indicator that is clearly showing the change of a trend along with the Commodity Index that indicates the overbought/oversold conditions. Still, they are not the best, and I will let you know why in future posts.

Than more technical indicators (and events like upgrades/downgrades by the known rating companies or analysts) you use with the chart than more precise your technical analysis will become.

Like the earning release dates, some websites publish the list of upgrades/downgrades on the listed stocks. You may find potential winners there. Concentrate on the small to middle caps stocks. After upgrades, they grow dramatically more than big caps.

Having that data, you may evaluate your new strategy. Let's call it a "factor 5" strategy.

You may try paper trades for a while to see if it is working to your advantage. If within one week the stock does not advance, sell it.
Otherwise, use the trailing stop and enjoy the ride.