The long way from tobacco seeds to premium cigars

Man, you're about to put flame to the foot of a handmade cigar, and for the next hour enjoy its rich, awe-inspiring smoke. Hold on!

Yes, you know that it was carefully made by hand, exclusively from tobacco (unlike the cigarette, no paper is included), but do you have any idea how long it took to get to this stage? As you puff, consider the human efforts involved in this $5, $10, or maybe $15 piece of luxury you're enjoying.

As one man said, the best handmade cigars take longer to create than fine automobiles, tailored suits, or even the house in which you live. From seed to smoke, the journey takes several years!

Cigar tobacco starts from tiny seeds, so small that they need to be pelletized, coated with an inert substance such as clay for easier handling (don’t worry, the coating melts away when watered in the ground). Many tobacco growers get their seeds by selecting their heartiest plants and harvesting the seeds from the flower that grows at the top of the plant (see the picture down below).

Each selected seed is a proprietary secret of the tobacco company, and, therefore, they lock them in safes. Otherwise, they could be stolen like it was once done in Cuba when the Castro came to power. Many tobacco growers ran away to Nicaragua, Honduras, and the Dominican Republic with the tobacco seeds in the jars.

When the seeds are planted, in about 2 months, a seed will turn into a seedling a few inches tall that's ready to plant directly in the ground.

At the next stage, cigar tobacco grows very fast, thanks to the climate and watering. It takes approximately two months for a seedling to grow into a mature plant. Once harvested, it spends another 40 to 60 days in a curing barn – a large warehouse.

What comes next? The fermenting and aging. Yes, indeed! The leaves need to age. If you think that everything is so scheduled and pre-determined, you are wrong. Here comes the similarity with the growing grapes to produce wines. The time to harvest the leaves greatly varies depending on the type of tobacco, weather, and many other factors. Everything is carefully considered, and the leaves are being carefully examined. You have to be a master of this craft to know when to harvest the tobacco leaves.

There is a lot of manual work in-between. After being planted, the plants usually are fertilized with a granular fertilizer once a week. The fields are hoed by hand, a very labor-intensive process in which the fertilizer is mixed with the earth and pulled toward the plant.

At about the one-month stage—halfway through the growing process—Connecticut-shade plants are still short, perhaps halfway up a tall man's knee, and it's time to tie them to support.

Workers tie a piece of string to the plant and then attach it to another string above to help it grow straight (I grow cucumbers the same way in my garden!). Then they remove by hand the lowest group of leaves on the plant, as well as any suckers -- the excess vegetation that grows above the tobacco leaves. After the leaves are removed, the field is hoed to push the soil above the nodes created by the removal of the leaves.

In the second month of life, the plant grows at full speed, and it can grow 2 inches in one hot and humid night. About 4 months from its start as a tobacco seed, the tobacco plants are fully grown and the leaves mature.

How tall are they growing? 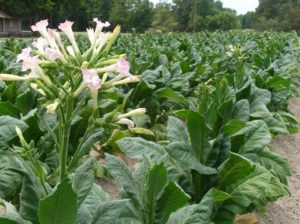 When it's come time to prime, or to reap, Cuban and Connecticut-seed tobacco plants are harvested by removing three leaves working from the bottom up.

Primed leaves are put onto lathes, or cujes, and hung in the barns. The entire plant is hacked with axes, allowed to wither in the sun, then speared on a lathe.

Whether it's primed or cut, the tobacco next goes to the same place: a curing barn, where it will spend about a month of drying and turn from a verdant green into a rich brown (see the picture below).

Cured cigar tobacco looks attractive, but it's hardly ready to smoke due to ammonia and other impurities that would make even the most die-hard smokers dizzy in the head if they were to smoke such leaf. To remove the impurities and to develop the hidden richness of the leaf, cigar tobacco needs fermentation.

Fermenting tobacco—or working it, as tobacco men say—takes 50% artistry and 50% science. Workers take cured tobacco leaves and lay them on a platform, building waist-high piles known as pilons, or bulks, that can contain thousands of leaves.

The leaves contain water, and the pressure of the pile—which can weigh up to 5,000 pounds—creates heat, which transforms the properties of the leaf. I would not walk into a room where fresh tobacco is being fermented – I would rather save my eyes - due to the ammonia coming off the bulks. 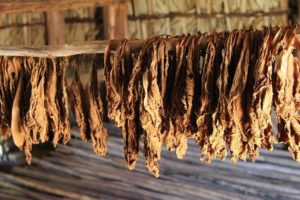 Fermentation can be quick or lengthy, depending on the type of leaf being worked. Thin, mild leaves such as Connecticut shade go through the process in a few months. Once the tobacco is dry it doesn't ferment anymore. Inside the bale, the tobacco will age, slowly maturing and mellowing the flavors.

No tobacco can be fermented continuously for five years, not even broadleaf, but it can be aged for that long, and much longer. Aging, which follows fermentation, occurs with much lower levels of humidity and in smaller packages, minimizing the heat created from the combination of moisture and pressure.

There are several brand-name cigar-makers such as Padrón, Fuente, Altadis, General Cigar, Matasa, Davidoff, and others that have warehouses stacked full of tobacco bales. The stocks are essential for the continuous sale of the cigars that are expected to have the consistent taste and flavor even after 2-3 years of sale.

All cigar-makers are blenders, much like the makers of wine, whiskey, bourbon, and cognac, and therefore the same brand of cigars is expected to maintain a consistency of flavor. So, the large bales of tobacco leaves are a necessity,

The piles of tobacco leaves are either being processed in the same factory or shipped to the special facilities that are specialized in aging and rolling the cigars only, and they may roll the cigars for several tobacco leaves growers. I was lucky to attend one of those places. But to read about my experience, you have to open another article (still in the works).