Why does Putin need Ukraine?

I am sharing this article with our club members. I am not in politics but I think people should understand why the dictators like Putin wants to grab Ukraine under its wing. 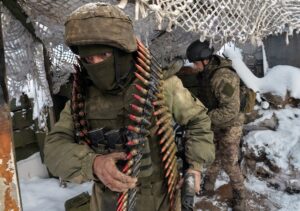 Putin has staked everything on trying to bring Ukraine back into the fold of Russia, whether she likes it or not, citing that Ukraine has always been part of Russia. At the same time, Putin called NATO the main threat to Russia, and that Ukraine cannot really join NATO in the near future.

So, what is behind all this? To answer this question, we must ask another one. Why does Russia have such power on the world stage? Although the territory and population of Russia are significant, the Russian economy is smaller than, for example, South Korea, whose population is 3 times smaller, and the territory is only 0.58% of Russia. However, Russia dominates because it is the second-largest oil producer in the world. In addition, Russia is the world's largest producer of natural gas, making Russia the leading exporter of this critical product.

Recent sanctions imposed by the European Union and the United States do not apply to the export of Russian oil and natural gas. This is due to the fact that in recent years the EU has received almost 40% of its gas and more than a quarter of its oil from Russia. In the US, 8% of oil and petroleum product imports come from Russia. More precisely, the Russian economy is built on the export of oil and natural gas, the combined revenue from the sale of which is up to 36% of the country's total budget.

This complete dependence on oil makes Russia an "oil" state, much like Saudi Arabia and Libya, where wealth and power are concentrated in the hands of the top. Currently, Russia is the only "oil" state in Europe. This is where Ukraine enters the scene.

In 2012, it was discovered that in the economic zone of Ukraine on the Black Sea there are natural gas reserves of about 2 trillion cubic meters, which could make Ukraine a real competitor to Russia. The greatest concentration of these deposits is located around the Crimean peninsula. In addition to this, the development of new technologies in the early 2010s. enabled successful drilling of wells for oil and natural gas from shale rocks. Ukraine has several such places with shale rocks in the east of the country in the Donbas region and in the west in the Carpathian Mountains.

The use of this treasure could mean a complete transformation of the Ukrainian economy. However, Ukraine had neither the technology nor the finances to create the necessary infrastructure.

To start building this infrastructure, Ukraine began issuing drilling licenses to US companies Shell and Exxon, which would allow Ukraine to become the second-largest exporter of oil and natural gas in Europe within a few years. At the same time, it would not need to build complex pipelines to sell these resources to the European Union, as Russia had to do.

Given these circumstances, it became clear that Ukraine's path to joining the European Union, and then NATO, could be guaranteed.

In 2012, when Viktor Yanukovych, a pro-Russian leader who kept pace with Moscow's interests, was president of Ukraine, the discovery of new oil and gas fields in Ukraine did not directly threaten Russian interests. This was demonstrated in November 2013 when Yanukovych suddenly struck a deal with Russia and rejected a long-discussed trade deal with the EU. Russia has agreed to invest $15 billion in Ukraine's public debt and cut by a third the international price of gas Ukraine buys from Russia.

According to Reuters, Yanukovych's "arm-twisting by Putin, including threats to the Ukrainian economy and the political future of Yanukovych himself," played a significant role in such a move.

Yanukovych's decision was a betrayal of Ukrainian citizens who wanted closer ties to Europe and who voted for him on his campaign promises. Protests began, leading to tens of thousands of Ukrainians gathering on Kyiv's Maidan and outside the Ukrainian parliament building. As the number of protesters grew, the Ukrainian security forces became more and more violent towards the protesters.

By mid-February 2014, after almost three months of protests by millions of Ukrainian citizens, the demonstrations turned into bloody clashes with the police. Many people died and thousands more were injured. When the situation became even more explosive, Yanukovych fled to Russia. On February 22, 2014, his government fell. These events were later called the Revolution of Dignity.

This changed the whole policy of Moscow. No longer able to co-operate covertly with Ukraine's puppet government, Vladimir Putin went on the offensive days after Yanukovych's flight.

Putin began by annexing the Crimean Peninsula, saying he was protecting the ethnic Russians living in the area. As a result, Russia took control of two-thirds of the Black Sea coast, i.e., the vast majority of the maritime economic zone of Ukraine.

Why does it matter? By gaining this control, Putin has effectively robbed Ukraine of roughly 80% of its newly discovered oil and gas reserves. In addition, he seized billions of dollars worth of drilling equipment and other infrastructure. The move completely undermined Ukraine's ability to challenge Russia in oil and gas exports.

After that, Putin actually sponsored a long, protracted conflict in the Donbas -- in the area where shale rocks were found. As a result of the ongoing conflict, both Shell and Exxon have canceled their contract with Ukraine to mine minerals in these areas. This deprived Ukraine of the opportunity to independently extract these resources.

Through this strategic blunder, Russia has secured the position it has desired since the collapse of the Soviet Union. Now not only do the newly discovered oil and gas reserves belong to Russia but also the strategic port city of Sevastopol. This is one of the few ice-free ports that the Russian Navy can use as a base for operations in the Black and Mediterranean Seas.

All of this brings us to today and why Putin decided to invade Ukraine.

For several years, Ukrainian President Zelensky has promised to return Crimea to his people. On August 23, 2021, the founding summit of the Crimean Platform was held in Kyiv, which was attended by senior officials from 46 countries, including the United States.

Zelensky addressed his colleagues with an impassioned speech. “The occupation of Crimea calls into question the effectiveness of the entire system of international security,” he said. "Without restoring confidence in her, no state can be sure that it will not become the next victim of the occupation."

As a result of the summit, a joint resolution was adopted condemning the annexation of Crimea and the violation of human rights on the peninsula, as well as its “militarization” by Moscow. It emphasized the need to "return to Ukraine" the Crimean Peninsula - "Participants welcome the necessary joint diplomatic efforts aimed at restoring the territorial integrity of Ukraine." Russian spokesman Dmitry Peskov called the summit "anti-Russian".

If Crimea is returned to Ukraine, then Ukraine will undoubtedly join NATO to ensure that no more "annexations" occur, Russia will lose its strategic military port of Sevastopol and will be in a completely different position regarding its main oil and gas resources, which dramatically change its dominant position on the world stage.

From Putin's point of view, the escalation of the conflict, the bombing of towns and villages across Ukraine, which he calls "special operations", was the only way he could solve this situation once and for all.

From Ukraine's point of view, the loss of resource-rich Crimea and eastern territories dooms it to a hopeless future with direct dependence on Russia. And as Zelensky said very eloquently, “Our truth is that this is our land, this is our country, our children, and we are going to protect all of this. Glory to Ukraine!".