The Guy's Guide to Become a Better Man

How Cigars Are Made

Hand-rolling cigars is an incredibly difficult skill that can only be mastered after years of practice. There are some highly skilled rollers in each cigar factory. They are responsible for rolling the highest quality cigars. Only after serious training, the cigar rollers are allowed to roll the cigars for sale and export.

There are several processes and steps to be taken for producing an end result – a cigar ready to be smoked. You really need to learn about entire process, and how complex it is, so, you will really appreciate the hard work of multiple people: those who plant, maintain and grow the tobacco; those who collect the leaves, those who transport and store them in special warehouses for certain time; those who cure and ferment them; those who choose ready to use leaves and brings them to the rolling factory (sometimes, hundreds miles away); those who separate good leaves from lower quality ones as well as removes the middle vein of a leaf – midrib – to avoid uneven cigar burning; those who actually roll the cigars; and finally those who put the labels on and select the best cigars for the boxes intended for sale. So, if you did not read about the harvesting tobacco, I encourage you to read now.

Having a vacation in Dominican Republic in 2008, and I was able to record the videos while visiting a local cigar factory. You have the opportunity to see the process of rolling cigars. Below are the links to the videos (.AVI format).

After you’ve watched the videos on cigar rolling, you will probably agree that the step that seems the most straightforward and simple is the bunching of the filler leaves. However, even this apparently basic step can be incredibly complex.

There are five main techniques for bunching filler tobacco for straight, or parejo, cigars: machine assisted, book, accordion, and entubado. The last one is a hybrid method: figurado.

Accordion bunching requires the roller to fold each individual filler leaf (like a book) and then stack the folded leaves on top of one another. The multitude of folds allows for greater airflow, and therefore a better draw.

The last one is the most complex and time-consuming bunching technique. Entubado bunching involves rolling each leaf individually and bounding them together. As you can imagine, it is the most difficult process, and therefore it is being used for special-production cigars in small quantities. Rolling each leaf individually allows creation of the more firmly packed cigar that let the air flow between each leaf, and, as a result, delivers more aromatics and flavor to the palate. 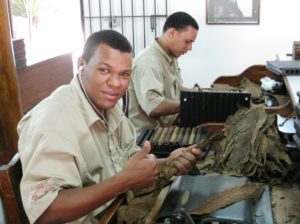 You may find more videos about cigar-rolling bunching techniques at the Tobacconist University site.

Once the blend has been selected, it takes no time at all to turn it from leaf to cigar. A buncher rolls one leaf of binder (sometimes two with smaller leaves, particularly in Cuba) around a group of filler leaves, then places the bunch in a mold, where it sits for several hours, being turned several times to avoid having a seam along the side. Once it is firm, its shape secure, the bunch is given to a roller. (In some cigar factories, one person does both rolling and bunching.) The roller wraps one wrapper leaf around the cigar, taking perhaps a minute or so to do the work.

A cigar roller can make 500 cigars in a day if allowed to work at his fastest pace, but typically a cigar factory manager will limit his workers to far fewer. One hundred fifty is more typical.

The years have taken the tobacco from seed to finished leaf, ready to be rolled, but there's more to the journey before a cigar becomes a brand. Bigger companies such as Altadis U.S.A. Inc. and General Cigar make dozens of brands, so new creations are a vital part of the business. Often, blends are created by a company's cigar factory managers, then the marketing team figures out a way to sell the best of the bunch.

They work with different tobaccos combinations and come up with different blends. Blending cigars may take more than year. The genesis of creation a great blend is often invisible. The cigar connoisseur is experiencing only the culmination of the artist's long years of dedication and effort. Yet, a cigar is much more than a skilled laborer's assembly of the tobacco leaves; it is the gift of craftsmen who rely on their hands to forge a solid elixir of simple pleasure.

After cigars are rolled, they are placed in an aging room where they remain for a minimum of 21 days. This permits the tobaccos to "marry," or blend, and acquire balance. Some companies age their cigars for up to six months or even more (like Padron) before shipping. 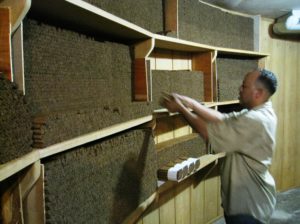 Once the aging is finished, the cigars are spread onto tables. They are sorted by hand into groups of 20 or 25 that will go into the same box. The process requires a keen eye for color, as there may be as many as 20 slight color variations. A sorter may also reject cigars if they have any visible flaws, such as cracks or blemishes. The cigars are then placed into boxes made of cardboard or Spanish cedar (depending on the packaging style, some cigars are wrapped in cellophane), sealed and shipped.

The next hand to caress the cigar's wrapper should be the smoker's, the final gentle touch in a cigar's life.

Once the cigar is ready, companies promote it to tobacco retailers, often at the annual Retail Tobacco Dealers of America trade show. After getting enough orders, the manufacturers begin to ship the cigars.

"Quite frankly," says Jon Huber, chief marketing officer of C.A.O. International Inc., "there is a lot more that goes into bringing a line to market than most people would suspect." 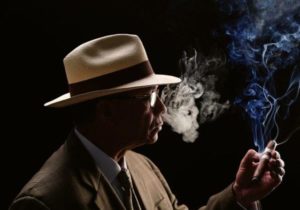 So pause for a moment before you turn that cigar to ash. Because from seed to box, it's been on a journey that may have lasted five or more years. Take your time enjoying the smoke, man.