The True Face of Socialism

“Not a single socialist government that controls the whole life and industry of the country can afford to free, harsh or angry expression of public dissent. They will have to resort to some form of the Gestapo - of course, with very humane goals at the initial stage.” Winston Churchill. 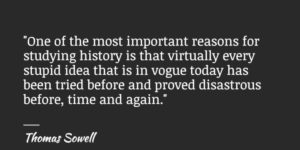 My goal for this blog is not to discuss political issues. My goal, as I indicated in the Introduction, is to help guys to become better men. Better men, in my opinion, is the one who, among other qualities, is politically educated, the one who recognizes the danger of socialism and teaches their kids how to recognize it.

I wanted to give you some information to use in your conversations with kids as well as an add-on to my concern about young men who lean to socialism.

At sixty kilometers from Krakow is the most terrible place in Europe - the death camp Auschwitz-Brzezink (Auschwitz-Birkenau). In two years, the Nazis killed a half million people here.

This concentration camp in Poland, specially created for the secret mechanized extermination of people, became a symbol of all the most inhuman that happened in the twentieth century. Virtually the only symbol. In Western Europe, nothing worse did happen. But it did happen in the USSR. 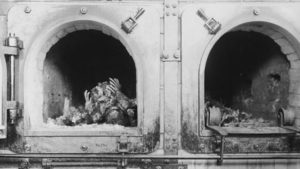 Seven or eight years before the release of Auschwitz by the Soviet soldiers, a series of special operations of the NKVD took place in the Soviet Union, later called the “Great Terror”.

Its beginning dates back to July 30, 1937, when the Order of the NKVD No. 00447 was issued, setting quantitative "limits" for the first (shooting) and second (imprisonment) categories for each region of the USSR, and also established the personal composition of the "triplets" who were authorized to sentence (chief of the NKVD, Secretary of the regional committee, regional prosecutor).

The first page of operational order number 00447 is dated July 30, 1937 (copy for the NKVD Administration of the Leningrad Region). 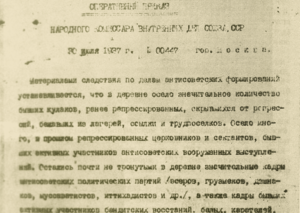 Within fifteen months, from August 1937 to November 1938, about two million people were arrested and convicted. Of those, 750 thousand were immediately shot. People are saying that there was a time when up to two thousand people were shot in Moscow per day. The scale is quite of Auschwitz. "Production tasks" assumed almost the same as in Auschwitz, as well as organization, planning, and the methods of work.

In 1937, most of the corpses were burned in the crematorium in the Donskoy Monastery. Then, when the performance of the crematorium was not enough, just buried in special zones.

Encrypted telegram from Omsk from 11.11.1937 “on the operation of the counterrevolutionary kulak element” (signatures: Stalin, Molotov, Voroshilov, Zhdanov, Yezhov). 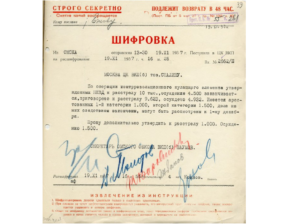 14 years before the liberation of Auschwitz, in 1931, mass starvation was deliberately organized in Soviet villages. Not that the government wanted to specifically kill as many people as possible, the goal was different.

At this time, Western technologies for industrial and military facilities of the first 5-year plan were procured on a gigantic scale abroad. And the only source of foreign exchange was the sale of grain and wood abroad. Therefore, in the years 1931–1934, food in the villages was repossessed.

The exact number of victims of the “Holodomor” (mass starvation) is unknown. The numbers range from a minimum of three to four to a maximum of eight to nine million people who have died of starvation. From two to six Auschwitz!

But the state industry for the extermination of people began to unwind even earlier when the plans of the first 5-year plan were adopted by the Communist Party and the problem of providing construction for the workforce arose. The fact that people voluntarily went from cities and villages to construction sites was out of the question.

Therefore, the plans of industrialization automatically included the plans of repression. The planned use of forced labor in the all-Union scale.

From 1929 to the mid-1950s, about 15 million people passed through the Gulag on falsified political accusations. There were also deliberately brutal articles “for the plundering of socialist property” when people were planted for many years for the spicas of grain carried away from the field or a spool of thread from the factory (for example, the law of “seven eighths”, 7/8/1932 verdicts: from 10 years to execution).

Similarly, people were arrested for late work and absenteeism. In total, we can talk about 20 million people. There were no death camps "per se" in the USSR but the task of the authorities was purely pragmatic: in the shortest possible time to squeeze all the forces out of a person.

By organization and technicality, the Soviet apparatus of repression was very similar to the Nazi’s apparat. In scale - far surpassed it.

Soviet prisoners raised a portrait of Joseph Stalin in honor of the release of Buchenwald. But they could not even be imaging that many of them will be transited directly from Buchenwald to the Gulag.

In the most difficult times, in the early 1940s, the average death rate in the camps as a whole reached 24% per year. It is difficult to count all those killed in the Gulag, but a 1.5 - 2 of Auschwitz is quite a realistic estimate.

In addition to those arrested and passing through the camps, there were even more numerous groups of the repressed - victims of forced migrations, carried out from 1930 to 1952. This is about six million people. These are dispossessed peasants (kulaks), evicted from the cities "deprived" and victims of ethnic deportations.

Ten nationalities were totally deported, many partially. Deportations were incredibly cruel and cold-blooded. Sometimes a whole train was landed in the winter savanna, where everyone froze out in a couple of days (the case of the Russian Germans in Kazakhstan). Sometimes the population of entire villages was shot or burned alive if it was not possible to complete the deportation on time (Balkars). There are no exact death rates among the deportees, but this is approximately another Auschwitz.

The Red Army has liberated Auschwitz, but it guarded the Soviet camps to the last. Few people know that Nazi concentration camps have been used in this capacity for another five years! Of the most famous - Buchenwald and Sachsenhausen (special camp number 2 and special camp number 7, in Soviet terminology).

Since 1948, the special forces were reassigned to the Gulag, and in 1950 were eliminated. But their equipment did not disappear: new zealous owners were taken out and used as intended in domestic camps. As follows from this document, collapsible wooden huts, kitchen and laundry equipment, and medical equipment were exported to the USSR. As well as some "production mechanisms" - what is hidden under this ominous definition is not deciphered in the document.

Therefore, there are no photographs of what was happening there, neither reliable figures nor exhaustive documentation. The documentation, of course, is there, but it is available only to archivists of the FSB. And they still do not share information. Therefore, today only Nazi concentration camps that have been well studied and turned into museums remain symbols of the mass destruction of people in the twentieth century.

The Soviet history after the Nazis should not become just history.

This is the face of real socialism, folks.

If you have missed the first article for the Social Life category, read it now.